The Mystical Tale of the Modern IT Superhero: Mr. Roger ReBoote

The Mystical Tale of the Modern IT Superhero: Mr. Roger ReBoote 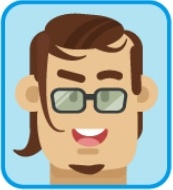 Synopsis: In the mid 1990s a man by the name of Roger Reboote is suspected to have come in contact with a rare technology gifted to him from the Sensei Master IT Overlord at the Big Rebooty Reboot IT Shop. The supposed technology took an already masterful technologist to next level sorcery, since then, Roger Reboote hasn't been seen.

From the collective passed down lore of the web, this is the story of the mysterious Roger Reboote of Kalamazoo, MI.

The Origins of Roger Reboote

On an average day, in an average hospital, an average family gave birth to a miraculously average boy... or so they thought.

It was 1978 in Kalamazoo, Michigan and the Reboote family had just welcomed their new baby boy into the world, soon to be named Roger Reboote.

Deep down, there truly wasn't anything special about Roger. He was normal. He was healthy. He was a well-behaved boy. He just kind of had... common sense.

Something that by definition shouldn't actually make him any different... right?

Really, the only strange thing about Roger is that he was born with glasses. Funny enough, the doctors completely missed it. The nurses missed it. Even mom and pop missed it.

It's like they weren't even paying attention to him.

(a rare photo of Roger Reboote with his glasses at the age of 3.)

Roger kept relatively quiet during his childhood. His parents, Nulla and Unum, never really took special note of the glasses and grew accustomed to them.

“A device so good you’ll throw your back out,” they used to say.

Despite the purchase, Roger’s parents, Nulla and Unum, were far too busy in 1983 to use the thing. Nulla and Unum were notable government workers and had some big project they were working on in the 80's that took up most of their time.

However for Roger, and the universe, a new direction was set.

As Roger began to pick up on the tricks of computing, he learned the basics of hardware and software. He learned about motherboards, power supplies, processors, graphics cards, DNS, communication protocols, data standards and more.

By age 7, he had created a software game like Pong.

By age 10, he was wirelessly hacking printers.

Not only was Roger developing his masterful technical skills, but at his young age he had already begun to adopt his iconic, but totally unnoticeable attire that has defined him throughout his life.

Slender with long hair, Roger had a bit of a hunch from the many hours on the IBM XT. He wore blue jeans, New Balance sneakers, an unbuttoned plaid dress shirt with a black t-shirt underneath that read “CS” in mysterious green writing and a belt full of various tools. And of course, Roger always sported his signature black, rectangular glasses. 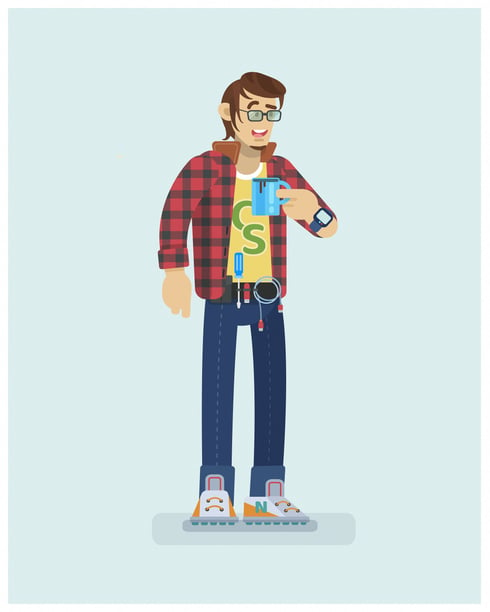 (Roger Reboote in his iconic uniform at the age of 14)

This was the uniform that Roger wore for the rest of eternity and just as he had planned, it was just simple enough for no one to notice. He was a man of efficiency and a good friend to the shadows. Having grown up a single child with busy parents, Roger acclimated to the systems and wavelengths of electronics. He understood them. They understood him.

He was a tinkerer, a creator, a problen-solver and a little maniacal.

It was late one Friday night that Roger's mythical tale truly began.

While sipping on Mountain dDew, snacking on Nacho Cheese Doritos and tearing up the wires from an old Apple Macintosh computer, the computer spoke to him.

“Is that you Mr. Macintosh?? ” Roger was stunned and startled.

“Roger - I have the answers”

“Nevermind… what are you here to tell me? ”

“Mr. Macintosh… I am sorry, but no shit. Everyone knows that.”

“Mr. Macintosh I thought you were going to say something wise.”

And with that, the old Apple Macintosh shut off and vanished into bits.

Roger paused and considered the advice that was shared with him… it seemed like common sense. Was the Macintosh imparting wisdom or… was the Macintosh just trapped in the past?

“Well that was dumb,” thought Roger.

That night, Roger remained curious. He went downstairs to speak to his momma, Nulla.

“Hey mom,” Roger called to his mother, “how do you fix your computer when it is not working?”

“Oh hi Roger, honey!! I usually just ask you to help, of course, you smart boy!”

“I call you on the walkie-talkie, sweetie!!”

“I… well.. I open tabs on Internet Explorer and then search for the Google. Sometimes I call the cable company and ask for the supervisor. Other times I yell and scream at the wall. I once poured milk on the computer.”

“You don’t just restart the computer?”

“Restarting the computer. What is that?”

His mother, Nulla, married to Unum, who had worked on a big government project in technology for a decade and was clueless.

Without even finishing the conversation with his Mother, Roger left, he ran upstairs and loaded up his utility belt.

And that was the moment.

At the age of 17, Roger left home and went to support, educate and save the world. He left in a rush that night with his mother still helplessly lost in the kitchen pouring 2% milk on broken computers.

Out the door he went and down his street he sprinted!

Unfortunately, Roger hadn’t done much running so by the end of the block he was out of breath and only walking briskly.

Mentally, though, he was wired and ready to go. He didn't know his destination but something... something was giving him a direction.

After a few anti-climatic hours later of brisk power walking, Roger finally arrived to the most revered IT Shop in all of Kalamazoo Michigan: The Big Rebooty Reboot Shop of IT Reboots.

He hesitantly walked in, it smelled of cheese wiz in the Big Rebooty Reboot Shop of IT Reboots. Roger looked around and noticed an older gentlenman.

It was the wise Sensei Master IT Overlord.

“Sensei Master IT Overlord of Big Rebooty Reboot Shop of IT Reboots -- the world is lacking common sense. They do not know that they can fix all errors with just a simple reboot.”

“My son. You have been destined your whole life for this moment. I have watched you and your internet browsing. You are wise. You are smart. You are also into weird stuff. But more importantly, this is your moment.”

The Sensei Master IT Overlord continued the conversation with an offering, “take these three batteries, swallow them, you will have everything you need.”

Without hesitation, Roger took the pills.

“Roger, you are now imbued with three powerful traits."

"Super Patience, making you forever calm and focused on your task to educate the world on the ways of Reboot. Super Reboote, capable of rebooting any device from 500 yards away. Super Remote Management, capable of managing any computer in the world with just your mind.”

And with that, Roger transformed! 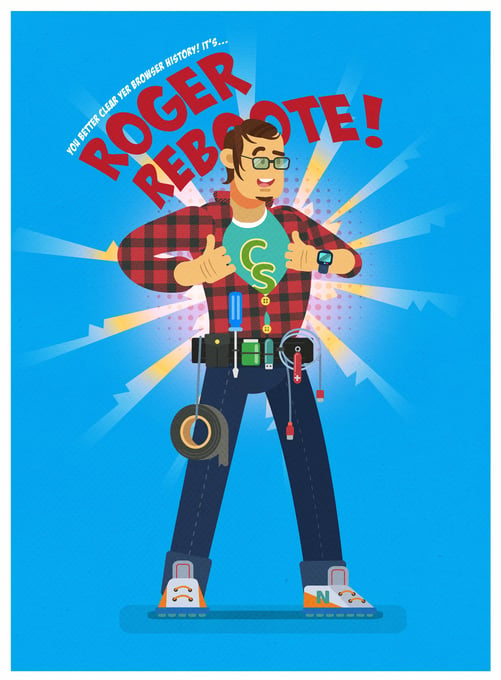 “Sensei Master IT Overlord - Thank you.”

“Now go. Go and educate. Keep our world’s networks and computers running. Ask no thanks. Expect no fame. Solve all problems. Be the logic and reason we need.”

And with that, Roger Reboote was gone. And gone for good.

But for the believers, they point to Roger for the great technological developments of the world.

Apple's sudden rise for the people? They point to Roger.

The cloud? It was Roger!

And as legend has it, if you go into a dark room with a dying computer, prepare an offering of black dark roast coffee and stare into the blue screen of death and wish three times over;

In a flash of light, the computer will work, the coffee will be gone and the answers solved.

Here is to Mr. Roger Reboote.

A SPECIAL THANKS TO OUR SPICEWORKS SQUAD

A big thanks to the Spiceworks community who participated in our contest in creating Mr. Roger Reboote. He is truly the sum of the many wonderful narratives our friends put together. 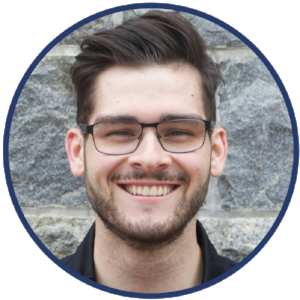