Terrifying Tech Hacks Keeping IT Pros Up At Night

Terrifying Tech Hacks Keeping IT Pros Up At Night

The scariest stories are the ones that are real. In this blog, we'll uncover the chilling reality of the latest tech hacks lurking just beyond the soft glow of your digital screens. For the IT pros tasked with confronting this reality, the near future is nothing short of terrifying. Readers beware, what you are about to learn might haunt your dreams.

Paranormal Voices From The Ethos

Imagine picking up the phone and discovering that the voice on the other end—is yours. Hackers have enhanced Deepfake scamming capabilities, which leverage machine learning, natural language generation, and social engineering to clone your voice and use it against you. From verbally requesting money transfers to manipulating those who trust you most, the sinister act of voice cloning is a frightening new feature in cybercrime. Listen for yourself.

If landing on a trusted website like Netflix, PayPal, or Apple gives you a sense of security, think again. Domain

impersonators are putting forth significant time and money to fabricate UI/UX experiences that are nearly identical to the websites you know and trust. These fake domains are so uncanny, they dupe even the savviest web surfers. Since January 2020, we’ve seen a 400% increase in attacks, and that percentage is expected to climb. (Security Boulevard).

A “Black Swan” Attack On The US Power Grids

The US power grid has become a coveted target since the first successful attack in 2015. Luckily, most attacks are non-disruptive. However, the blow that landed last March put cybersecurity experts at full attention. During the event, hackers successfully leveraged vulnerabilities in the firewall at a power control center located in the Western United States, causing operators to lose control of communication with several remote power generation sites for minutes at a time. The control center was able to regain security, but the event hit far too close to home for experts and industry leaders. Power and utility organizations across the globe are now preparing for what they call a “black swan” event that (if successful) could cause total infrastructure collapse, including medical facilities, telecommunications, and financial sectors.

Strangers Who Watch You Sleep At Night

Every single connected device under your roof is an invitation for hackers and terrorists to invade the comfort and privacy of your home. In one case, the parents of a 10-month-old awoke to the sound of a man screaming from their child’s bedroom. The screams were coming from the internet-connected, video-enabled baby monitor. When the father entered the room in a panic, the video camera turned directly toward him, and the man who, evidently, had hijacked the monitor began screaming obscenities until the unit was unplugged. According to IT professionals, IP cameras are easier to hack than most people realize.

Supernatural Screams From The Unknown

The New York Times reported on a study that makes Steven Spielberg’s movie, Poltergeist, seem like child's play. Rather than spirits communicating through your TV set, researchers discovered a way to “hide” verbal commands in white noise or YouTube videos and deliver those commands at a frequency beyond the human hearing range to control smart devices and perform activities inside your house. According to experts, it’s likely that this discovery is already being used by cybercriminals. You might want to double-check the smart locks on your doors. 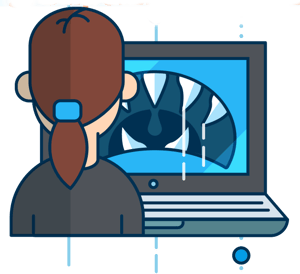 For all its good, innovation has a dark side that creates terrifying new challenges for IT professionals and cybersecurity experts. In addition to monitoring technical performance and security measures, they now face the strange new responsibility of managing machine obedience. Unsung heroes of the ethernet—we have your back.

Keep tabs on tech with SherpaDesk, the definitive helpdesk solution for all your support, project management, and billing issues.

Jessy turns tech talk into thought-provoking stories for readers and leaders across the country.