Dreamforce and the Rise of Tech Company Towns

Dreamforce and the Rise of Tech Company Towns

Company towns are as old as America itself. One can argue that the history of America is the history of company towns; from the Pilgrim settlements at Plymouth Rock to the Mormon temples of Salt Lake City, and from Henry Ford factory towns to Hollywood and Walt Disney's planned urban utopias. Company towns, it seems, are as American as apple pie. But what happens when Silicon Valley giants start to build their own company towns?

There's something about America's vast landscapes that has attracted and excited the imaginations of countless dreamers, religious prophets, entrepreneurs, and searchers of their place in the sun (even if that place already belonged to someone else in the ﬁrst place).

Silicon Valley sprung out of orchards in the late 1960's to become the ultimate company town. A company town made up of several companies and distinct municipalities and cities.

As Silicon Valley grew geographically, it also grew politically and became more and more critical to the economies of the communities where its companies settled.

The Balkanization of Silicon Valley

The more generic Silicon Valley of yesteryear has given way to a Balkanization of sorts. Nowadays it seems like the largest tech companies are eager to carve a slice of territory to call their own.

This Balkanization of Silicon Valley has generated a veritable arms race between the different municipalities governing the Bay Area. Who will offer the most signiﬁcant incentives for these tech giants to settle there? These incentives usually come in the form of massive tax breaks, or other large concessions.

Apple, who built a new giant alien spaceship-shaped campus on its ﬁefdom in Cupertino, argued that their new $1 billion+ campus was only worth $200 for tax purposes. Google is now building "GoogleTown" on land around their Mountain View campus, which will include leasing an airport (Moffet Field) from the US government. Soon Google employees will not only work there, but also live there, and even ﬂy out of a Google-branded airport.

Facebook, just up the road in Menlo Park, is also building their own Facebook town (Willow Village), a 59 acre planned community in what is now the slightly blighted working class neighborhood of East Palo Alto (blighted is a relative term in Silicon Valley, as rents in East Palo Alto already reach well over $2000 a month for a one bedroom. This is considered working class as rents in Palo Alto proper start at $3500 and up).

Not wanting to be outclassed in the urban developer’s dream going on further south, Salesforce has focused on building their urban utopia in the City of San Francisco. Their ambitious dream, now a reality, includes the city's largest skyscraper, several other glass high rises surrounding it and naming rights for the new Transbay Transit Center at the foot of the Salesforce Tower.

San Francisco Skyline, with the Salesforce tower looming above it all

The Transbay Transit Center and Salesforce Park is a space-age inspired transportation hub with a rooftop park spanning three city blocks. Salesforce has agreed to a 25 year, $110 million naming sponsorship. The park includes an amphitheater, restaurants, a walking path, landscaped gardens and the feeling of living in the future. Below the park, there’s a two-level bus station with a dedicated ramp to the Bay Bridge and the promise of train connections in the future.

Only that the future is today, and Salesforce Park and its Transit Center are closed (just six weeks after its official opening) because of two cracked support beams discovered right on time for Dreamforce.

The Dream of Dreamforce

Dreamforce has been compared to a cult or a religion, and it certainly looks like one when its thousands of participants descend into town to attend the conferences, events, and concerts that include top acts like U2, Foo Fighters, and a 'little local band' called Metallica.

But let's forget the hype for just a moment and pretend that an alien (sans cage) has just landed at Dreamforce 2018.

Let’s imagine that this said alien is standing right outside the ﬁshbowl of the Salesforce Tower's lobby, looking through the glass at all the hyper-happy geeks and geekesses sporting their blue Dreamforce passes while being escorted by guides dressed like national park rangers. The whole scene is dominated by massive TV screens featuring close-ups of the Salesforce CEO's face on heavy rotation.

If our visiting alien is literary inclined, he might be excused if he thought that the whole scene jumped straight out of George Orwell’s 1984, with Big Brother’s face relentlessly staring at everyone from massive and ubiquitous tv screens, throwing the eager crowds into a frenzy.

Our alien takes a step back, and in the glass of the Salesforce Tower’s lobby appears the sad reﬂection of the closed Salesforce Park and Transit Center. It looks like the carcass of some futuristically mechanized slain giant in a Japanese anime. 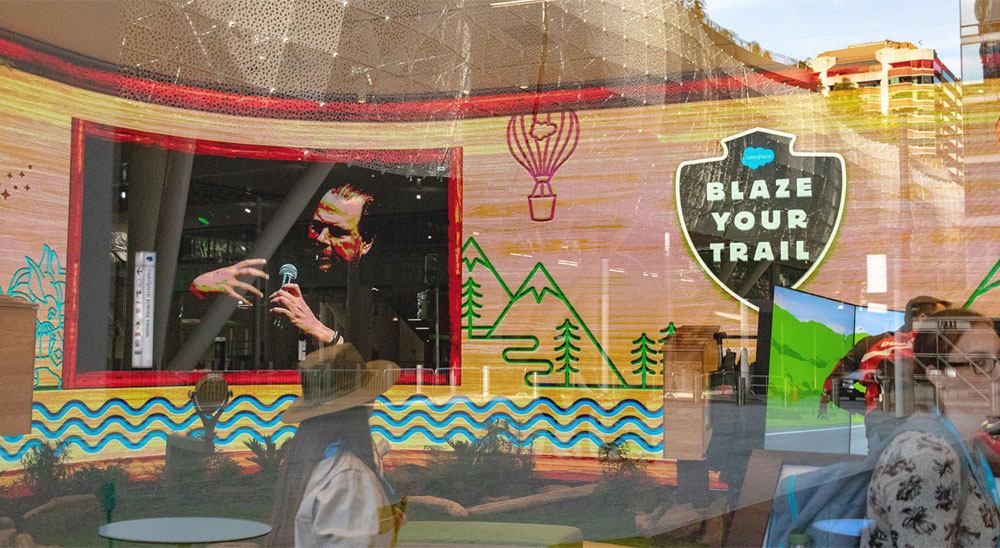 Blaze Your Trail: Under the reﬂection of the closed Salesforce Park. Dreamforce or 1984?

How indicative is this of the actual state of the modern tech company town? Silicon Valley is all about glam and hyperbole and quarterly bonuses and billions in angel investing, but we can't ﬁx the potholes already forming on the Salesforce park's roof? Never mind the cracks in the support beams that forced the closure of the whole complex right on time for Dreamforce.

What's going to happen when the new Googletowns and Facebooktowns develop their own potholes or, god forbid, crime waves, or garbage disposal problems? Who will be responsible? The local city, or some unelected corporate board? Is this the future we’re living in? One where corporate governance decides how and where we live? Because we know how that story ends.

Proﬁts for shareholders doesn't always align with the needs of a local community. Why pay for proper garbage collection if some third rate company can do it cheaply, but poorly? Why ﬁx the potholes when we have self-driving cars to sell? Why pay for the most reliable support beams? We have these here second hand cheap, better save money for the next quarterly bonuses and stock buybacks and, by the way, where’s my tax cut?

“I've seen the future”, Leonard Cohen once prophetically said, "and it's murder". 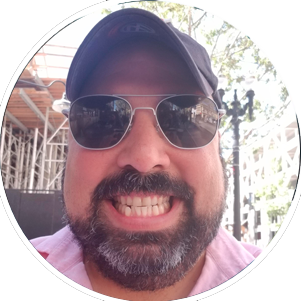